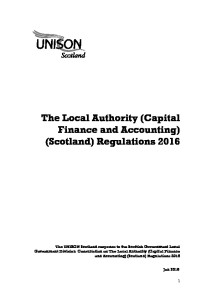 We had called for the Scottish Government to relax the repayment of loans fund regulations, arguing that councils should be given greater flexibility. This would assist in managing their borrowing, potentially freeing up not insignificant sums at a time of severe constraints due to austerity cuts. It is regrettable that there has been such a delay in action on this, since the earlier consultation in 2011, and that the consultation was for only four weeks, including the Christmas holiday period.

However, we are pleased that the proposed changes, including the draft 2016 Regulations, do offer local authorities more options and greater autonomy on borrowing, linked to the CIPFA Prudential Code.

The main comment we wish to add is in response to the review group proposals which are not currently included in the proposed Regulations, namely that:

New purposes for borrowing (extract from the Consultation Response sheet)
The review group proposed that the purposes for which a local authority could borrow should be extended.

This included a new provision to enable a local authority to borrow to either make grants to third parties where these grants fund capital expenditure, or for the authority to incur expenditure directly on third party tangible assets.

The review group also proposed a further new provision – for a local authority to be able to borrow to lend to any of its subsidiary bodies where the loan is to be used to finance capital expenditure of the subsidiary.

UNISON Scotland urges Ministers to include this change. We agree with the above proposals, detailed in consultation questions 30 and 31. One important example of how this would help public services, both councils and health boards, would be if councils could use this type of borrowing to support, for example, buyouts of expensive PFI contracts (as happened in Hexham in 2014iv, also highlighted in our Combating Austerity proposalsv) or, perhaps, to finance new conventional spending via Integration Joint Boards, offering health boards an alternative to expensive hub/PPP/PFI/NPD schemes. While we would argue this is feasible now under existing powers, this proposal would make it explicit, clear and simple, encouraging innovation and more efficient use of public funds.