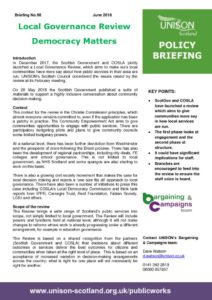 In December 2017, the Scottish government and COSLA jointly launched a Local Governance Review. The aim is to make sure local communities have more say about how public services in their area are run.UNISON‟s Scottish Council considered the issues raised by the review at its February meeting. Here is a summary of that discussion: Local Governance response summary

The Scottish government has published  materials to support an inclusive conversation about community decision-making.The outcomes of this review could potentially range from strengthening current best practice on engagement, to wholesale structural change across all public services in Scotland. As such it has significant implications for UNISON members.

The commissioning partners have agreed some guiding principles and a process. They do not, at present, share a common direction of travel for reform. The Scottish government has been centralising services. They have also been strengthened powers of direction from the centre. Albeit with a narrative around local voice. COSLA on the other hand wants to see devolution extend further than the Scottish Parliament, down to councils and communities.

UNISON Scotland has made a wide range of submissions on public service reform that broadly make the case for local delivery. There has been an emphasis on staff involvement in the design of services in partnership with communities. However, we have also recognised the risks of a localism approach that could lead to further fragmentation of public service delivery. Hence the case for national frameworks on staffing issues.

It is important that the voice of staff who deliver public services is heard in this process. Branches are therefore encouraged to organise local events to discuss the review and feedback views. The report of the table top discussions held at the February Scottish Council is on the website with this briefing.There are a range of materials at the review website