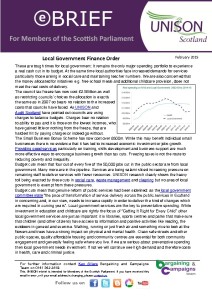 Extract:
Public expenditure in Scotland faces year-on-year real term reductions. By 2020 it will be 12.5% lower in real terms than when the Conservatives came to power in 2010. This is the equivalent of one pound in every eight being cut by 2020. There are also further commitments on Scotland’s public services including around £250m in payroll costs due to the UK government increase in National Insurance contributions.

The decisions made by the Scottish Government mean that Local government is bearing the brunt of the cuts to public sector budgets. Of the 50,000 jobs cut in the public sector 40,000 have been in local Government. The next round of cuts will be worse for local government with at least another 15,000 jobs under threat. While redundancy has been voluntary work doesn’t disappear and the remaining staff have had to take on extra work while services are salami sliced. Our reports on the damage to public services reports detail the impact on services. This is no longer sustainable.