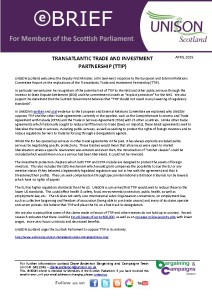 UNISON Scotland welcomes the Deputy First Minister, John Swinney’s response to the European and External Relations Committee Report on the implications of the Transatlantic Trade and Investment Partnership (TTIP).
In particular we welcome his recognition of the potential risk of TTIP to the NHS and other public services through the Investor to State Dispute Settlement (ISDS) and the commitment to seek an “explicit protection” for the NHS.  We also support his statement that the Scottish Government believes that “TTIP should not result in any lowering of regulatory standards”.
In UNISON’s written and oral evidence to the European and External Relations Committee we explained why UNISON opposes TTIP and the other trade agreements currently in the pipeline, such as the Comprehensive Economic and Trade Agreement with Canada (CETA) and the Trade in Services Agreement (TiSA) with 23 other countries.  Unlike other trade agreements which historically sought to reduce tariff barriers to trade (taxes on imports), these latest agreements seek to liberalise the trade in services, including public services, as well as seeking to protect the rights of foreign investors and to reduce regulatory barriers to trade by forcing through a deregulatory agenda.