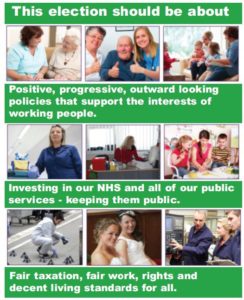 UNISON Scotland statement to members on the General Election

Having ruled out the possibility of an election, and despite a commitment that the Parliament would run its full legal term until 2020, she has instigated a cynical and tactical U-turn.

Her objective is to take advantage of the current political climate to seek an increase in the Conservatives’ UK parliamentary majority and to free her government from scrutiny over the difficult questions that will inevitably arise during the negotiations with the EU.

The stage has been set for a single issue election, the narrow focus of which the Prime Minister believes will deliver her a comfortable victory.

The campaign gives us an opportunity to keep cuts to public services at the top of the political agenda – so that it is not just fought on the Tories’ favoured turf.

This election cannot be allowed to become a rerun of the EU referendum. Nor can it be a dress rehearsal for any future Scottish independence vote.

The focus of this election should be on the disastrous policies of the current government and its immediate predecessor.

Ideologically driven austerity; tax cuts for the rich; deregulation; savage cuts to public services; the neglect of manufacturing and other key sectors; attacks on unions and on workers’ rights; and the systematic dismantling of the welfare state and social security.

It should be about the terrible impact of these policies.

A struggling economy; declining real wages; the growth in precarious work; widening inequality and increased poverty; rising xenophobia; reduced access to pensions and social security; the crumbling fabric of our health, education and other public services; increased household debt; and the mismanagement of the public finances.

We must have a campaign that is meaningful. Where progressive, outward looking policies and a socially just vision for the future are rewarded at the ballot box, and where reactionary, insular policies, which aim to exclude and divide, are rejected for the destructive agenda they represent.

This election must be about the need for positive, progressive policies that support the interests of working people.

We are at our most effective when we focus on talking to our own members about the issues UNISON has real authority to speak on – public services and the jobs and financial pressures faced by those who provide them.

We are able to talk directly to our own members to encourage them to press candidates from all parties on the progressive policy demands of the trade union movement.

Members can and should get more involved – asking questions of candidates or canvassers who knock on their door.

Let’s make sure we all use our vote.