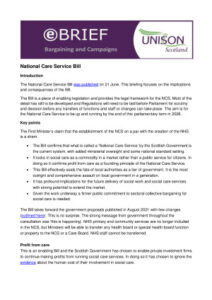 The National Care Service Bill was published on 21 June. This briefing focuses on the implications and consequences of the Bill.

The First Minister’s claim that the establishment of the NCS on a par with the creation of the NHS is a sham.