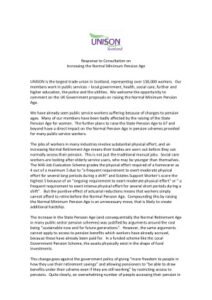 The UK government is proposing to raise the minimum age at which workers can access their pensions.  They want to raise it from 55 to 57 in 2028, to coincide with an increase in the State Pension Age.  Most current members of public sector pension schemes will be protected and able to access their pensions at 55 (or 50 for some), but this change will discriminate against younger workers.  It is an unnecessary restriction, and stops workers accessing their own deferred wages.

UNISON Scotland is opposed to this damaging proposal and calls on the UK Government to retain the Normal Minimum Pension Age at its current level.