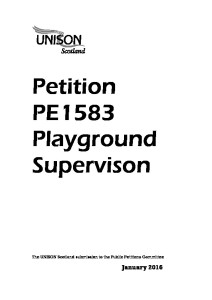 Evidence
In response to the committees request for evidence we conducted a survey of branches. There is a mixed picture across authorities: some do appear to have janitors or school support staff starting work at 8.45 but this appears to be a local decision rather than a national or even council policy. Many schools also have breakfast clubs starting at 8 or 8.15 with a range of charges for this service.

UNISON has no issue with taking a national approach to pre 9 am playground supervision. It would for example ensure that parents are clear about when children can be safely dropped off at school. It will though be necessary to clarify what is meant by “playground supervision”. UNISON has been campaigning for better childcare and the expansion (and for some areas introduction) of breakfast and afterschool clubs for those parents who need childcare. Playground supervision cannot become a cheap alternative to proper childcare provided by qualified and appropriately paid staff.
Supervision, if provided, must be part of a person’s job and done in working time not least for insurance and liability reasons. It is important to note that some staff may not be able to be flexible about their working hours as they have chosen their current post as it fits in with their own childcare responsibilities.

There are clear cost implications to providing playground supervision. The petition refers to Aberdeen City Council citing costs as the reason for not introducing the policy. It would mean extending or changing working hours for some staff or taking them away from work they were currently undertaking which would then need to be covered by someone else. Local government has borne the brunt of public sector cuts in Scotland. Over 40,000 jobs have been lost and the information we have gathered from local authorities indicate they expect the next budget allocations to be equally difficult to manage leading to as many as 15,000 more job cuts. Any extra obligations placed on local authorities must be accompanied by funding to cover the costs. Given the cost implications better co-ordination of school transport may be a more effective route to solving the problem the petitioner highlights.

Conclusion
UNISON Scotland represents a UNISON members working in schools across Scotland. Members are increasingly concerned about the impact of cuts to local government budgets therefore any extra obligations placed on local authorities must be accompanied be adequate funding. UNISON welcomes the opportunity to provide evidence to the committee regarding Petition PE1583: playground supervision