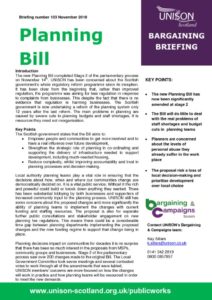 This briefing lays out UNISON’s concerns about the new Planning Bill. The Bill has now been significantly amended and will move back to the parliament for a final debate soon. UNISON believes that the problems often raised in relation to planning are not about the current legislation. They are caused by severe cuts to planning budgets and staff shortages. It is resources planning departments need not reorganisation.

UNISON still has some concerns about the proposed changes and more significantly the ability of planning teams to implement the changes with current funding and staffing resources. The proposal is also for separate further public consultations and stakeholder engagement on new planning fee regulations. This means there could be a considerable time when planning departments will have to implement changes while the problems with the current fee systems have not been resolved. .

UNISON believes that the route to improved participation in planning is through democratic policy setting in the first place and ensuring that those policies are adhered too. This would be a much more effective route than extended appeals which the wealthy, be they businesses or individuals, have the resources to fund and therefore override local authority planning decisions. Planners already indicate that they suffer a great deal of personal abuse on the phone, by email/letter and on social media. We need a system that lessons conflict in order to protect workers in planning teams who are implementing not making planning policy.