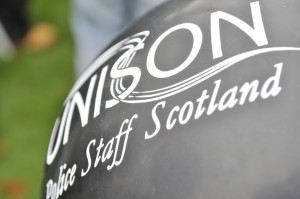 Both years will also see a matching percentage increase on enhanced shift rates.

The deal runs to the end of March 2021 and was agreed by members in an online ballot that saw a 96.7% vote in favour on a 67.7% turnout by affected UNISON members.

UNISON police staff Scotland branch secretary Michelle Brewer pointed out that the lowest rate on the Scottish Police Authority pay scale will be £19,221 a year for a full-time job.