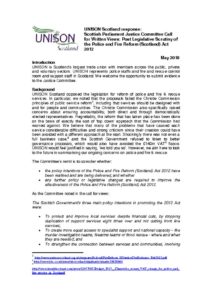 This is the UNISON Scotland response to the Scottish Parliament Justice Committee’s call for written views on Post Legislative Scrutiny of the Police and Fire Reform (Scotland) Act 2012.

UNISON opposed the legislation for reform of police and fire & rescue services. In particular, we noted that the proposals failed the Christie Commission principles of public service reform, including that services should be designed with and for people and communities.

The Christie Commission also specifically raised concerns about ensuring accountability, both direct and through democratically elected representatives. Regrettably, the reform that has taken place has been done on the basis of exactly the sort of ‘top down’ approach that the Commission had warned against.

We believe that many of the problems that have caused each service considerable difficulties and strong criticism since their creation could have been avoided with a different approach at the start. Shockingly there was not even a full business case, and the Scottish Government refused to listen to better governance proposals, which would also have avoided the £140m VAT fiasco. UNISON would feel justified in saying, ‘we told you so’. However, we aim here to look to the future in summarising our ongoing concerns on police and fire & rescue.