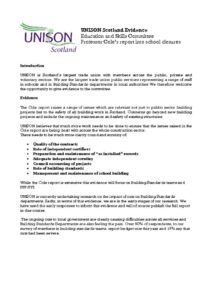 The Cole report raises a range of issues which are relevant not just to public sector building projects but to the safety of all building work in Scotland. Concerns go beyond new building projects and include the ongoing maintenance and safety of existing structures.

UNISON believes that much more work needs to be done to ensure that the issues raised in the Cole report are being dealt with across the whole construction sector. There needs to be much more clarity round and scrutiny of:

UNISON is currently undertaking research on the impact of cuts on Building Standards departments. Sadly, in terms of this evidence, we are in the early stages of our research. We have used the early responses to inform this evidence and will of course publish the full report in due course.

The ongoing cuts to local government are clearly causing difficulties across all services and Building Standards Departments are also feeling the pain. Over 50% of respondents, to our survey of members in building standards teams, report budget cuts this year and 16% say that cuts had been severe. Initial responses to our survey do show that Building Standards departments are now focused on the approval of warrant drawings and meeting the initial response deadline. Many feel that the pressure to meet performance indicators prevents them from focusing on the quality of the work that they do. In particular they do not have time for “preventative work”. This is particularly disappointing as focusing on prevention was one of the key recommendations of the Christie Commission on public service reform.

While UNISON opposed PPP schemes from the outset, we accept the findings in the report that PPP was not in itself the cause of the problems found. Problems like those identified can occur with any construction project which is why proper regulation and adequate funding for those tasked with ensuring the regulations are met are so crucial. We do believe that there are some reasons why such failures are a bigger risk in PPP schemes.

Firstly, the construction company in a PPP scheme is almost always an equity partner of the SPV running the scheme. In effect this means they are both the client and the contractor. Unlike conventional procurement, there is no council or other public service provider performing the supervisory client role.

Secondly, there is a profit incentive to keep costs to the minimum. Any saving that the construction partner can make, increases profits to both the construction company and the other SPV partners. There is therefore a stronger cost saving incentive than in conventional procurement.

Thirdly, many PPP schemes have been under pressure to cut costs late in the project because of budget overrun. We know that this has resulted in specification cuts, such as fewer beds in PPP hospitals and the loss of planned teaching areas in PPP schools. There is bound to be a concern that this may drive construction changes as well.

Fourthly, PPP schemes tend to use standard designs to keep architectural costs to a minimum. This has been criticised on aesthetic grounds because designs don’t always reflect the local setting. It also means that a design feature that fails, could have implications for not one building, but many.