The Scottish LGBT committee attended Pride in Edinburgh on 2 July where we were joined by members from Edinburgh, Aberdeen, Fife, Glasgow, and Inverness

Our stall was a huge success and we spoke to members and public about the importance of being in a union, the fight against austerity, racism and LGBTI issues.

We talked about the EU referendum and what it could mean for equality. We recruited new members and we gave a very positive image of our work.

Our literature on the “No to pink washing” campaign was a great talking point and as one Jewish man told us “I am so glad to finally see someone telling the truth about Israel” He told us real stories about the reality of being a gay man living in Tel Aviv. Very moving. 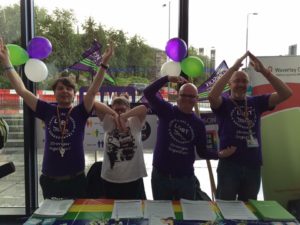 It was the biggest event in years and we heard some great speakers. We stood in solidarity with the family of Jo Cox, the victims of Orlando and held a minute silence then a minute of noise for all victims of homophobic, biphobic, transphobic and all hate crimes.

Very very proud to be a UNISON member today.