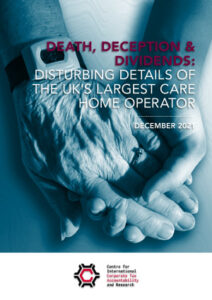 “Public money allocated for care of some of our most vulnerable citizens should be going into delivering care here in Scotland – not going to offshore bank accounts. This money could have been used to tackle staff shortages, train more staff, or buy more PPE – which has been the root of so many problems. Hedge funds and finance houses aren’t about providing care, they’re about making money. If we allow them to be the big players in our care system, the sort of horror stories we’ve heard in the last couple of years are inevitable.

“UNISON wants social care to be provided on a not-for-profit basis. If it is good enough for the NHS, it should be good enough for social care. The Scottish government says it supports ethical commissioning, so we need hard detail and solid commitments from ministers that these sort of companies, that have failed so badly in the last couple of years, aren’t part of any national care service in the future. Care should be a service to the vulnerable – not a commodity in a market.”

Notes:
• UNISON is the largest trade union in the UK and represents social care workers across Scotland. UNISON Scotland has been leading the campaign for a National Care Service which would include financial transparency and accountability, and a commitment to fair work and quality care provided on a not-for-profit basis.

• A Report by Centre for International Corporate Tax Accountability and Research: Death Deception and Dividends: Disturbing details of the UK’s largest care home operator will be released on Monday 6 December. The report suggests that tens of millions of company profit have been shifted to the Cayman Islands. At the same time, HC-One reported losses which reduced UK tax payments but was also used to justify calls for more public funding and higher fees.

• On 3 September last year BBC reported that: “HC-One is to be taken over by NHS Highland. The health board received government funding of £900,000 to buy Home Farm in Portree from HC-One.” https://www.bbc.co.uk/news/uk-scotland-highlands-islands-54013830