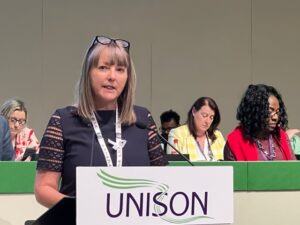 Conference slammed the cost of living crisis which leaves our members faced with high rates of inflation which are eroding the spending power of our member’s pay.

The rising inflation rate comes alongside soaring energy costs and with food prices spiralling by 20%,

Conference backed a composite motion from Scotland and Cymru Wales setting out a comprehensive strategy to mitigate against the cost of living crisis we are now living through.

Moving the composite, UNISON Scotland Convener, Lilian Macer told delegates that now is a time for investment, not cuts.

“Price rises aren’t a force of nature – they are the result of political decisions,” said Lilian.

“Political decisions that are about putting private greed over public need. You don’t need to look any further than your electricity bill to see what is happening.

“What we are calling a cost of living crisis is a consequence of putting private greed ahead of public need,” slammed Lilian, calling on delegates to remember that and say it loudly in the months ahead as we defend living standards for the people the country really needs.

She warned that the below-inflation wage rises and pay freezes which have been the norm over the last decade have contributed to slow growth, worsening inequality and a recruitment and retention crisis in key sectors of public services.

“We should take no lessons on restraint from this lot, or their friends in the cabinet.

“The money to fund services exists – what is lacking is the political will to levy the taxes and collect them,” added Lilian, calling for a more effective tax system that limits the opportunity of the rich to avoid their social responsibility.

“UNISON members do the jobs that hold society together and make civilised life possible. The country needs UNISON members – and UNISON members need the union to help them organise to fight for their families and their communities.

“If we come out of this week focussed, determined and ready to do that, our time in Brighton will have been well spent.”