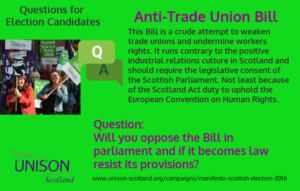 The Anti Trade Union Bill is a crude attempt to weaken trade unions and undermine workers’ rights. It runs contrary to the positive industrial relations culture in Scotland and should require the legislative consent of the Scottish Parliament. Not least because of the Scotland Act duty to uphold the European Convention on Human Rights

Question: Will you oppose the Anti Trade Union Bill in parliament and if it becomes law resist its provisions?