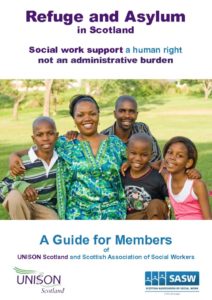 This updated guidance provides some underlying general guidance and signpost to other more detailed information sources. It should provide a useful tool for negotiating with employers to ensure that the right resources are put in place, including awareness training and staffing.

The first issue of this document was in October 2006 in order to provide a framework for ethical practice to UNISON and SASW members Scotland who are social work and social care practitioners providing a service to asylum seeker families with children, or to unaccompanied asylum seeking children.

The original guide was focused on asylum seekers, but as refugees, particularly from Syria, are being relocated in Scotland, the document also covers aspects of the support they too require. It touches on migrants from EU countries, who face uncertainties as well as increases in racism and hate crime, as a result of the Brexit process.

Since the orginal document the issues that underlie the movement of peoples from their homelands to other parts of the world have escalated and increasing numbers of migrants are seeking refuge in Europe from wars and economic disaster – much of it created by the policies of governments in the richer nations.

Many face death, harassment and exploitation on their journeys and the situation facing migrants is both complex and seemingly overwhelming. To keep all this in context it should be stated that most of the estimated 59.5million (2014 figures) refugees who are displaced, seek refuge within their own countries or neighbouring developing (i.e. poor) countries: 95% of Syrian refugees are hosted in just five countries: Turkey, Lebanon, Jordan, Iraq and Egypt. The UK has estimated refugee numbers of just over 117,000 – 0.18% of the total population of the UK. Issues are often exaggerated in the mainstream press to bolster the views of populist right wing politicians who feed off the plight of the world’s most vulnerable.

Against this background it is increasingly common for social workers across Scotland to be asked to intervene in the lives of children who have come to this country from devastated areas of the world. Some arrive legally through government sponsored relocation schemes, some come with their families, some arrive as unaccompanied children, some arrive illegally through their own efforts, and some through deliberate trafficking to work in illegal settings such as cannabis farms or the sex industry, or even legal settings such as nail bars, hotels or private homes. All are vulnerable and in need of varying degrees of support.