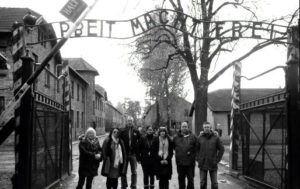 UNISON’s Renfrewshire UNISON branch held an “Evening of Reflection” on 7 April to report on a study tour to Auschwitz-Birkena death camp and pay tribute to Scottish missionary Jane Haining who was killed in Auschwitz for her missionary work in Hungary saving the lives of approximately 400 Jewish children.

Mark Ferguson, UNISON Renfrewshire Branch Secretary, said: “Observing first-hand the atrocities which took place instils a responsibility on us all to ensure future generations do not repeat this murderous acts.

“Our event provided an opportunity to recount our visit to Auschwitz and elaborate on our experiences. I am very honoured that representatives of Jane Haining’s family joined us for the event to allow us the opportunity to recognise her selfless bravery.”

Sam Macartney, chair of UNISON Scotland’s International Committee paid tribute to the branch for the event: “It was a harrowing experience for all, but the delegation must be commended for their shared awareness and their commitment to insuring that the truth can never be hidden and the atrocities committed will never be forgotten”, he said.

“With the increasing rise of the right wing and their shared hatred of diversity and socialism, we trade unionists who welcome all cultures and respect international solidarity must speak out wherever we are aware of human beings enduring suffering and humiliation, we must name their oppressors. Silence encourages the tormentor and undermines the tormented!

“27 January is the day when all holocaust victims must be remembered, whether it be under the Nazi persecution of millions of the Jewish faith or the subsequent genocides in Cambodia, Rwanda, Bosnia and Darfur, we must be vigilant, this must never be allowed to happen again.”

Sam said the “Evening of Reflection” really touched on many of the issues and feelings felt by the members of the study tour as they visited the locations where so many had their lives cruelly stolen from them in horrific ways and in brutal conditions.

The branch made many contacts in their local community that brought many events and stories to light from local people who had known someone or had lost a loved one or friend during this terrible time.

Sam added: “The branch highlighted the story of the life of a brave heroine, Jane Haining, a local women and missionary, who under massive pressure and threats saved many Jewish children in Germany and had her life taken while protecting and helping the children she loved.

“She was murdered in Auschwitz along with millions of other poor souls whose only crime was to be born in a time of hatred and despair.”

Her life story and deeds are available to view on the Dunscore community website and also the official Auschwitz holocaust memorial website.

“Jane was awarded the highest honour by the Jewish communities. Her story of hope and commitment is incredible”, said Sam.

For further details on the Renfrewshire branch study tour the branch would be happy to assist with any details you require.