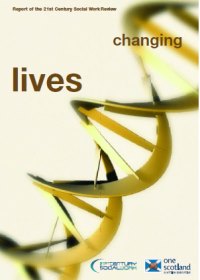 Despite this, the Review was welcomed by UNISON who believed it would examine the current pressures facing social services staff in Scotland, including recruitment and retention, job status and pay structures.

The review was set up under the Chairmanship of William Roe and included membership from Local Authorities, Social Work Departments, Charities, SSSC, etc. The main aim of the Review Group was to “take a fundamental look at all aspects of social work in order to strengthen its contribution to the delivery of integrated services.”

It was recognised that Scotland had changed since the 1968 Social Work Act, with an increasingly elderly population, greater numbers of children in need, a more fractured society medical, etc. have meant that social work services also needed to change.

Under the main Review Group, there were 5 sub groups:

The groups carried out more than a year of intensive work across the whole of Scotland talking to professionals delivering social work services, those who use the services, academics and managers and the general public.

The Report, entitled Changing Lives, was launched on 8 February 2006 by members of the Users and Carers Group, assisted by Willie Roe, Chairman and Peter Peacock, MSP, Minister for Education and Young People. The report drew three fundamental conclusions:

The Report looks at the changing context for Social Work Services and in particular, defines the Role of the Social Worker, an issue UNISON had real concerns about

The report emphasises that a new direction for social work services must be implemented and makes several recommendations on how this can be achieved:

The Scottish Executive has welcomed the findings of the 21st Century Review and committed itself to bringing forward legislation to drive the changes that are needed to meet the aims of the report.

In particular, it will, amongst other things:

In addition, to the above, the Executive will support the whole change process with additional funding.

The change programme will also:

The Scottish Executive will be discussing the detailed implications of the Review’s findings prior to producing a full implementation plan. This will form the

second stage of the Executive’s response to be published later in the year which will include detailed funding proposals, outcome measures and performance monitoring arrangements

UNISON will be considering its response at the Social Work Conference to be held on 24th March 2006 in Glasgow which will be addressed by Willie Roe, Chairman of the Review..

At the Conference, members will need to consider: