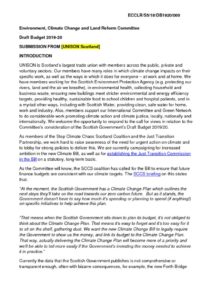 This is our response submitted to the Scottish Parliament’s Environment, Climate Change and Land Reform Committee’s Call for Views on the Draft Budget 2019/20.

As members of the Stop Climate Chaos Scotland Coalition and the Just Transition Partnership, we work hard to raise awareness of the need for urgent action on climate and to lobby for strong policies to deliver this. We are currently campaigning for increased ambition in the new Climate Bill, as well as for establishing the Just Transition Commission in the Bill on a statutory, long-term basis.

As the Committee will know, the SCCS coalition has called for the Bill to ensure that future finance budgets are consistent with our climate targets. The SCCS briefing on this states that:

“At the moment, the Scottish Government has a Climate Change Plan which outlines the next steps they’ll take on the road towards our zero carbon future. But as it stands, the Government doesn’t have to say how much it’s spending or planning to spend (if anything!) on specific initiatives to help achieve this plan.

Currently the data that the Scottish Government publishes is not comprehensive or transparent enough, often with bizarre consequences, for example, the new Forth Bridge appearing much better for the climate than the re-opening of the Borders Railway, because it used less concrete and steel to build.

We believe the change we are calling for will make it far easier to scrutinise and assess the Budget and the Climate Change Plan in conjunction with one another, and we urge Committee members to support this in the Bill. Clearly, financial reporting by the Scottish Government and other public bodies should also be carried out in ways that allow for comparisons of the costings of preventative spending, a focus of the Committee’s scrutiny. The Committee has said it wants to consider how the concept of preventative spend should be built into the formulation of the Scottish Government’s budget. We welcome this…

…Spending on action on climate change is in itself preventative spending. As was reported clearly in the Stern Review of the Economics of Climate Change in 2006, spending early on emissions reduction and on adaptation is less expensive than delaying and having to deal with the consequences of climate change. As Stern put it: “The benefits of strong and early action far outweigh the economic costs of not acting.”

Ten years later, in 2016, Nicholas Stern warned that he hadn’t been stark enough in his report, telling The Guardian: “With hindsight, I now realise that I underestimated the risks. I should have been much stronger in what I said in the report about the costs of inaction. I underplayed the dangers.”

We believe the financial reality of this supports the already very strong case for strengthening the targets in the Bill, including to 77% by 2030 and net zero by 2050 at the latest, as called for by SCCS.