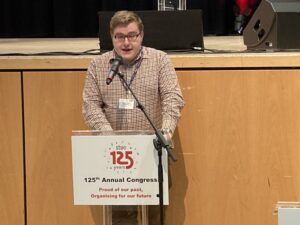 #STUC22 The STUC threw its weight behind the campaign for free and safe transport home for all workers finishing work when adequate public transport is not available.

Driven by the experiences of hospitality workers, many of them young workers, Congress recognised that a lack of access to safe transport also affects workers in other sectors and falls disproportionately on women, Black, disabled and low paid workers.

Supporting the call, UNISON young member, and vice-chair of the STUC Youth Committee, Fred Bayer, in his first Congress speech, told Congress that as a straight, cisgender, able-bodied white man, when it comes to walking on his own at night, he is comparatively safe.

“Sure, I could still get mugged, or some big drunk guy could decide he doesn’t like the look of me – and this is why the motion calls for safe transport for all workers.

“Still, we have to acknowledge that this is an equalities issue. It’s staggeringly unlikely for me, as a man, to be sexually assaulted or kidnapped by a random stranger on the street at night. But sadly, we know it happens to women, to Black people, and to members of the LGBT community.”

Fred added that he became aware of the issue when he happened to chat to a cleaner, working 10pm to 4am and making £60 per shift.

He discovered that she was then having an hour’s walk to get home because she didn’t drive and a taxi each way would cost her about half of her wages.

She was also a single mum of a 10-year-old boy.

“Now Congress, I also grew up with a single mum and I can tell you, if I was that boy, I’d be thinking every night, “What if my mum doesn’t come home safe?”” said Fred, calling on employers who insist on making staff work ungodly hours, for poor wages, to at least make sure their workers get home safe.