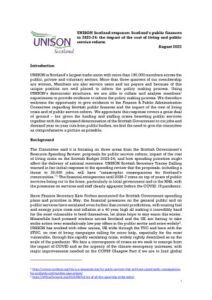 This is UNISON Scotland’s response to the Scottish Parliament Finance and Public Administration Committee’s Call for Views as part of its Pre Budget Scrutiny.

The Committee is focusing on three areas from the Scottish Government Resource Spending Review: Scotland’s public finances in 2023-24: the impact of the cost of living, and public service reform.

UNISON’s priority areas of focus in our necessarily detailed response are:

We set those out against a background in which, since Finance Secretary Kate Forbes announced the Scottish Government spending plans and priorities in May, the financial pressures on the general public and on public services have escalated even further than recent predictions.

Soaring fuel and energy price costs and inflation at a 40 year high all make it incredibly hard for the most vulnerable to feed themselves, let alone hope to stay warm this winter. Meanwhile hard pressed workers across Scotland and the UK are having to take strike action over scandalously low pay offers in the public sector and more widely. UNISON has worked with other unions, UK wide through the TUC and here with the STUC, on cost of living campaigns calling for more help, especially for the most vulnerable, through this rapidly escalating crisis, widely rightly described as on the scale of the pandemic.

We face a convergence of crises as we seek to emerge from the impact of COVID and as the urgency of the climate emergency increases, with major improvements needed on the COP26 Glasgow Pact if we are to limit global temperature rise to 1.5C, in ways that deliver a just transition. Inequalities are at the heart of these crises and fair work is an essential part of the solutions.

Our members deserve quality pay rises that take account of inflation and the cost of living crisis. They and other key workers kept vital services going through the pandemic. But the doorstep claps have turned to cold shoulders and pay cuts, while there is no shortage of money for city workers or for chief executives, including energy bosses and the energy companies rake in billions in profits. No wonder our health members are balloting for strike action for the first time since devolution, while in local government we have some strike dates already announced, with more to come.