UNISON and other trades unions, including EIS, have said that the move to level four will further heighten concerns over school and early years establishments safety and we call on the Scottish Government to consider a temporary move to blended, online or distance learning. Should they not do so, and schools are forced to remain fully open when staff feel it is unsafe to work, they should seek advice from their branch in terms of the Safe Workplace guidelines attached.

As well as protecting those working in our schools, and those most vulnerable to the virus, we need to protect other workers in non-essential public service roles and sectors of the economy who face the economic fall-out of new restrictions.

Workers who are extremely clinically vulnerable/clinically vulnerable or pregnant should assess whether they believe that the Covid 19 mitigations in their workplace, such as physical distancing or their use of public transport for work, remain acceptable in the light of the move to level four. They are entitled to request an individual risk assessment and associated mitigations, which could include not attending the workplace in some circumstances. Employees should discuss any issues with their line manager and if trade union advice and assistance is required contact the UNISON branch for advice.

UNISON firmly believes that schools and early years establishments should not be fully operational during level four.  We and other trade unions are lobbying the Scottish Government on this matter. There needs to be fewer staff and pupils attending schools and early years establishments. There are a variety of possible arrangements to deliver this and councils need to implement them.

Here is the empirical SAGE evidence being used by Cabinet to underpin the decision to keep schools operational at level four.

A note on Management Information Reports on relevant evidence is attached.

In the meantime, if groups of UNISON members believe that the current health and safety mitigations in their workplace are inadequate then they should contact​ UNISON branch. There are several courses of action open to members in these circumstances, described in the attached guide. 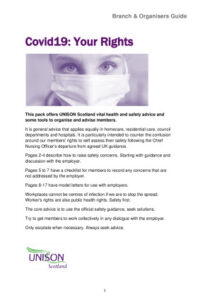 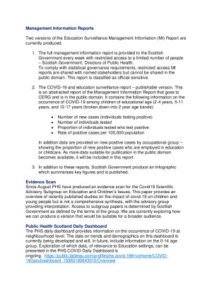