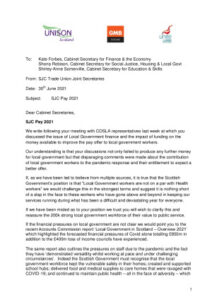 The three trade unions representing local government workers across Scotland have written to the Scottish Government condemning their decision not to provide additional funding to COSLA to improve the local government pay offer.

The move comes as all three trade unions prepare for formal industrial action ballots of their members on local government pay after their members overwhelmingly rejected the offer made by COSLA in March. Negotiations have stalled since then with COSLA arguing that they do not have sufficient funds to improve the offer unless the Scottish Government give them additional money and the Scottish Government arguing that they have no locus in the discussions.

The trade unions state that local government workers have gone above and beyond in their response to the Covid pandemic – a fact which has been underlined in the recent Accounts Commission report ‘Local Government in Scotland – Overview 2021’ and recent surveys of their members experiences over the past year – and deserve reward and recognition for their efforts.

Johanna Baxter, UNISON Scotland head of local government, said: “If these comments are true they are a disgrace and nothing short of a slap in the face to every single local government worker across Scotland. For Government Ministers to stand on their doorsteps and clap home care workers for their pandemic response but then in private say they are ‘not on a par’ with their colleagues in health is the height of hypocrisy and disrespect.

If it hadn’t been for these workers our NHS would have been overwhelmed, our children left without an education and our most vulnerable left alone and without care in their own homes – these workers have put their own lives on the line and have done so on some of the lowest wages in the public sector.

The Scottish Government are able to find money when it suits them – pitting worker against worker with their ‘Covid reward payments’ – but the constant is that local government workers are always forgotten. There should be no ‘hierarchy of the deserving’ amongst public sector workers in Scotland and local government workers deserve better than being used as a political football between the Scottish Government and COSLA”.

Wendy Dunsmore, Unite Scotland said: “The Scottish Government is treating local government workers as the poor relations in our nation’s public services. It’s appalling that Kate Forbes appears to be pitting local government workers against those in social care and the NHS by making clear distinctions about who is more deserving of a decent pay rise when all our public service workers are deserving. Homeless workers, school workers who have kept hubs open, refuse workers who have kept our streets clean, road maintenance workers who have kept our nation moving and social care workers who continue to care for our loved ones have all been totally snubbed by the Scottish Government. Let’s remember that more than half of all local government workers earn less than £25,000 a year with the majority of those being predominantly women, and many of them have to apply for top-ups from the state to keep them above the breadline. It’s shocking that they are being repaid by next to nothing.”

Drew Duffy, Senior Organiser, GMB Scotland said: “This would be the second time Kate Forbes has made comments that suggest the Scottish Government has set a hierarchy in our public services. Before the election our carers were played-off of nurses as an excuse to keep them anchored to £9.50 an hour, and now we understand the Finance Secretary has said local government staff are not on a par with the NHS. The vast majority of local government staff that have worked throughout this pandemic have done so on just under or over £10 an hour and the offer on the table won’t amount to much more than an extra tenner a week in their pockets. It shows a total lack of value for their vital work, but a vacuous comment like this would also be totally disrespectful after everything these local heroes are doing for all of us.”