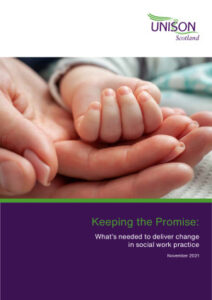 Social work staff are struggling to deliver the services that children and families need due to understaffing, underfunding and a lack of resources, according to a UNISON survey published today (Tuesday).

Key themes among social work staff who took part in the survey included:

Kate Ramsden, a children’s rights officer and a member of UNISON’s social work issues group, said: “Our members are telling us that they don’t have the staff or the resources to meet the needs of the children and families who rely on them. They say they don’t have enough time to build relationships with children and they are struggling with understaffing, high caseloads and process-driven systems that mean they must prioritise those most in crisis.

“This makes for alarming reading and should act as a massive wake-up call to the Scottish Government. We need to make sure children and families are at the heart of reform and we need to ensure decisions are child-led rather than resource-led.”