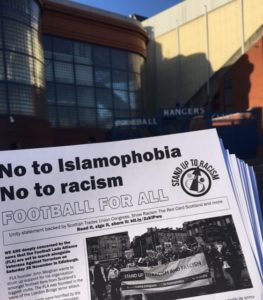 The Scottish Trades Union Congress (STUC) is supporting the ‘No to Racism, No to Islamophobia! Football for All!’ anti-racism event organised by Stand up to Racism, this Saturday 25 November in Edinburgh. The protest is being organised to highlight the racist and Islamophobic basis on which the Football Lads Alliance (FLA) are organising. The FLA have stated their intention to march alongside Vetrans against Terrorism that day.

It is vitally important that we mobilise to support this and the annual STUC St. Andrew’s demonstration in Glasgow, also on the 25th November. We all have to work together to ensure that the St Andrew’s Day March and Rally is bigger than ever before.

We hope that those on the East Coast join us on the Stand up to Racism ‘No to Racism, No to Islamophobia, Football for All’ unity event on 25th November in Edinburgh to take a positive anti-racist message onto the streets and protest against Islamophobia and racism.

Full FLA statement can be read here: https://goo.gl/oEjR1z
Stand up to Racism Scotland’s ‘No to Racism, No to Islamophobia – Football for All! anti-racism protest, assemble 10am St Andrew Sq, Edin (TBC): https://www.facebook.com/events/640879369634455/