UNISON has welcomed the Scottish government’s announcement to pay NHS uplift ‘as soon as possible’.

UNISON wrote to the Scottish government on May 12 to inform them that UNISON, the largest trade union in the NHS, had voted overwhelmingly to accept the proposed Agenda for Change pay deal for 2021/22. This will see the majority of NHS staff receive a pay increase of at least 4%, which will be backdated till December.

Willie Duffy, UNISON Scotland head of health, said: “We are delighted that the Scottish government has agreed to pay this award into the wage packets of hardworking NHS staff. UNISON has campaigned hard for the NHS team throughout this pandemic and our position has always been that this is the best pay deal we could get through negotiation.

“The fact that 84% of those who took part in the ballot voted in favour of the pay offer shows how much this pay increase means to our members. Scotland’s health workers go above and beyond to keep our NHS services running – not just during the pandemic but each and every day – and we’re delighted to have secured them a fair pay increase.

“The NHS has very difficult times ahead. Not least because of the backlog of patients who have had medical procedures delayed because of Covid. UNISON will continue its campaign for increased investment, and better conditions and pay across the health and public services to support our recovery from this pandemic.”

UNISON is Scotland’s largest NHS trade union. UNISON members on Agenda for Change pay grades were eligible to take part in the ballot. This was an e-ballot and eligible members were sent an email with a unique link in order to take part and almost 50,000 were balloted. Those who had not provided UNISON with an email address were still able to take part via our website using their membership number or national insurance number as security. Support with ballot queries was provided via branches, the UNISON Direct helpline and a dedicated email address. 35% of those who were eligible to take part in the ballot voted, with 84% voting to accept the pay deal.

Other health unions in Scotland balloted their members on the pay offer and the majority voted in favour of the deal. In response, the Scottish government has agreed to implement the pay deal as soon as possible.

Members who have any queries should contact their branch. 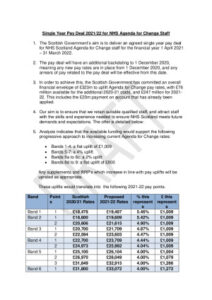 Further detail on the offer

This past year has highlighted the dedication, skill and sacrifices that all NHS staff make. Their contribution must be recognised in their pay packets.  UNISON balloted its members and they voted overwhelmingly in favour of the pay offer.

We have circulated this offer to UNISON health branches across Scotland. If you have any questions please contact your branch. You can use this  Branch Finder to find their details. 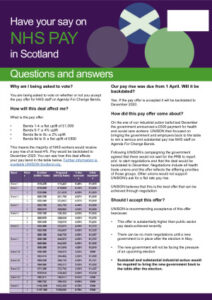