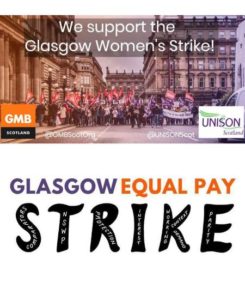 The STUC says it has been inundated by messages of support from across Scotland for the UNISON and GMB members taking strike action for equal pay on 23 and 24 October.

The STUC criticised politicians and commentators “who claim to support equal pay and to value the work of carers but run for cover when it comes to supporting industrial action.” Meanwhile it has received reports suggesting that male workers not directly involved in the dispute will support the women by refusing to cross the picket lines and enter work.

STUC Deputy General Secretary Dave Moxham said: “Our message to the Glasgow women strikers is that your cause is just and we have nothing but admiration for the action you are taking. Be assured that you are supported not just by trade union members but by many, many others too. The workers will be boosted by support from organisations such as the Scottish Pensioners Forum who know only too well that fairly paid, properly respected care workers are vital to achieving decent levels of care.”

“Stories in the media over the past few days have been designed to undermine the strike. We are pleased that scaremongering misreports relating to life and limb cover have been denied by the council and that they are using the resources available to them to ensure there is cover in place.

“Politicians and commentators who claim to support fair pay and equality for public service workers need to decide whose side they are on. To collectively withdraw one’s labour is a fundamental democratic right. Workers who work for low wages and deliver lifeline services with dedication should not have this used against them to undermine their action when they finally say enough is enough.”

The STUC has received messages of support and solidarity from a range of organisations, including:

Eleanor McKenzie, Scottish Pensioners Forum:
“Our members believe that it is only right that workers should be paid for the job that they do and that there should be no discrimination or disparity in pay on the basis of gender, as has been the case for many years. We hope to continue working with UNISON and other trade union who represent the striking workers to ensure that older people are cared for in the manner they deserve and by workers who are being paid fairly and honestly for the work that they do.”

Emma Ritch, Engender:
“Engender stands in solidarity with the striking women workers of Glasgow City Council. The work of carers, cleaners, caterers, and learning assistants has historically been undervalued and under-paid. This undervaluation of women’s work by Glasgow City Council is against the law, and the women who are withdrawing their labour are expressing frustration at seeing justice delayed for over 10 years.

“Low paid workers have not taken the decision to strike lightly, and we are making a small donation to each of the GMB and UNISON strike funds to help ensure that their action does not result in financial hardship.”

Agnes Tolmie, Scottish Women’s Convention:
“Women’s work is undervalued and underpaid. Without the vital roles undertaken by our sisters, communities would grind to a halt.

“Women should not have to undertake long legal battles for what is rightfully theirs. For years they have been forced to endure more work for less pay. We stand with all those women who fight to have their voices heard.”

Denise Christie, Fire Brigades Union:
“Glasgow women are the backbone of the council and the city cannot function without them. The strength and unity these women have shown is inspirational. Firefighters will be standing in solidarity with you today, tomorrow and for however long it takes for this injustice to be resolved. Keep strong and united sisters.”

Larry Flanagan, Educational Institute of Scotland:
“The EIS sends its solidarity to all UNISON and GMB members involved in Equal Pay strikes. We support your campaign and we believe that it is outrageous that women still need to take industrial action in order to achieve equal pay for equal work for women. We wish you well with your action and hope that you are successful in your campaign – which is in the vanguard of defending women’s rights at work.”

EPSU – the European public service union grouping – in a message to all its affiliates across the continent, said that  an equal pay victory for the thousands of Glasgow women who are striking “would be an inspiration to the millions of other women in public services who are fighting for better pay and to see essential jobs in services like social care given the value that they deserve”.

In a message to all its affiliates across the continent, EPSU asked them to support the action and send solidarity to the UNISON and GMB members involved.