The Chairs of UNISON Scotland’s International Committee, Sam Macartney and Health & Safety Committee, Scott Donohoe are taking part in a delegation to Bhopal, India, to mark the 30th anniversary on 3rd December 2014 of the industrial disaster that has killed 25,000, left 120,000 chronically ill and continues to maim subsequent generations.

Sam said: “The UNISON delegation supports the Bhopal Medical Appeal as part of UNISON’s ongoing commitment to international issues around the world.

“The Bhopal campaign continues its major support for victims workers and communities in India seeking justice from Union Carbide, now Dow chemicals, to take responsibility for its actions in causing this major disaster in 1984. UNISON fully supports the communities and workers in this endeavour.

“The UNISON delegation will seek to gain the knowledge and personal experiences from workers and communities who lived through this harrowing time and support them to gain justice and retribution. Lessons must be learned and UNISON can help to raise the profile of this campaign and help to get the message out that health and safety and workers rights cannot be denied.”

How you can help

Sam and Scott are urging Scottish branches to undertake the following steps in order to help mark the anniversary, advance the campaign and keep the fight alive for decent health and safety here:

• Hold an event on 3rd December 2014 (or as close as possible) to mark the anniversary, try and get members and employers involved;

• Consider making a donation to the Bhopal Medical Appeal

• Invite Sam or Scott to speak at a Branch meeting following their trip;

If someone in your Branch would like to get involved in ongoing campaigning around Bhopal then please encourage them to hook up with University & Colleges Union activist Eurig Scandrett at 07539 305176 or EScandrett@qmu.ac.uk .

Sam Macartney and Scott Donohoe will be in Bhopal, India, to mark the anniversary of the disaster on 3rd December 2014. They are posting updates here during their visit. 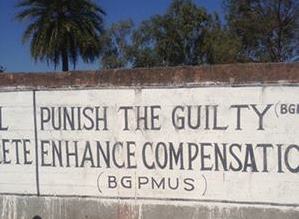 Wednesday 3 December update from Sam Macartney: This is the day 30 years ago when the Union Carbide industrial disaster claimed 25,000 lives, left 120,000 chronically ill and continues to maim subsequent generations.

The anniversary rally took place along with a march by all the families and supporters to the Bhopal plant walls.

An excellent rally was planned and policed by the Bhopal group and supporters and this was achieved with little or no police or army presence.

It was a very hot day and water was provided at many places along the route. The rally at the wall then burned effigies of Dow and Union Carbide. 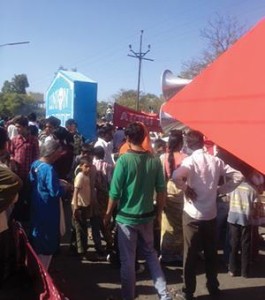 Later the screening took place of a new movie about the disaster called ‘A Prayer for Rain’, featuring Martin Sheen. Many of the survivors and their families attended, some having never set foot in a cinema before.

I was very moved by the fragile condition of many, yet they came and sat through an event that must have brought back horrific memories to them all.

During my time here I have witnessed some terrible hardship and deprivation. But also some incredible courage and kindness. 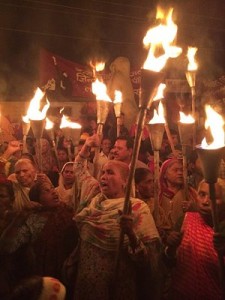 Tuesday 2 December update from Sam and Scott: Tuesday began with a national solidarity meeting with families and NGOs who support the campaign.

Then a visit to the workplace of the women who have taken the nfight to the courts and the Indian government. They have their own trade union now but they still haven’t received justice for the disaster.

Next we visited the new Bhopal People’s Disaster Museum. This is a tribute to those that lost their lives and those who are still suffering. It was very harrowing but very moving.

Then we joined with families, activists and campaigners on a torchlight rally to the old factory walls. This was incredible. Real torches steeped in paraffin were carried through the city for about two miles. 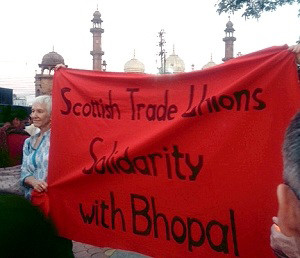 The torches were kept alight during the march by men refilling these wood and metal torches with fuel.

In the darkness this was a fantastic sight but I can’t see this catching on in Scotland due to health and safety concerns (that’s a real shame).

Finally, the hunger fast starts at midnight tonight for 30 hours signifying one hour for every year that has passed since the disaster caused by Union Carbide.

Fasting in solidarity with Bhopal families 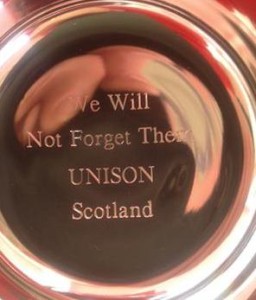 Tuesday 2 December: UNISON’s Sam Macartney will be joining friends and families of the Bhopal disaster on a 30 hour hunger fast from midnight on Tuesday to 6.00am on Thursday. “It is the least I can do after what we have seen”, reported Sam.

UNISON Scotland’s Sam Macartney and Scott Donohoe are part of a trade union delegation to Bhopal to mark the 30th anniversary of the Union Carbide disaster that killed 25,000, left 120,000 chronically ill and continues to maim subsequent generations.

Yesterday they took part in a demonstration after being shown around the Bhopal Sambhavna medical aid clinic and the great facilities they have and the excellent work they are doing to support the victims of their families. 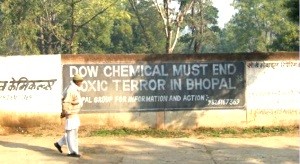 The facility also includes a clinic for children who have been poisoned by Union Carbide. The clinic (Chingari) rehab clinic supports over 200 children who have suffered due to the poison from the chemical spill from the Bhopal plant. Since its inception in 2006, Chingari, founded by gas victims Rashida Bee and Champa Devi Shukla, has helped 740 children and grandchildren of gas victims. (The Hindu newspaper)

Sam and Scott are sending regular updates but are having some technical communication problems. Scott Donohoe hopes to get more pictures to us when he gets to Mumbai.

More news about the delegation

Bhopal Medical Appeal (pdf) – information on the delegation, campaign demands and how you can help 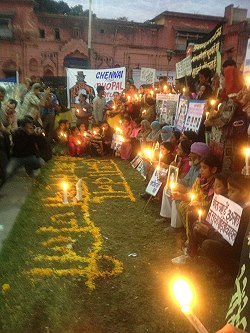 Monday 1 December 6.30pm from Sam Macartney: Yes I was on a demo in India, and I and all the trade union delegates to Bhopal were honoured and and very pleased to walk with families and friends of the Bhopal campaign.

We had joined the demo after being shown around the Bhopal Sambhavna medical aid clinic and the great facilities they have and the excellent work they are doing to support the victims of their families.

The facility also includes a clinic for children who have been poisoned by Union Carbide. The clinic (Chingari) rehab clinic supports over 200 children who have suffered due to the poison from the chemical spill from the Bhopal plant.

They offer help and support with support and funding from the Bhopal medical aid campaign it is so very important that this aid continues for all concerned. You can donate to the Bhopal Medical Appeal by clicking here

Monday 1 December: From Sam Macartney in Bhopal: Many events have been organised over the next three days to remember the victims of this disaster.

Proceedings started on Sunday with the Mela of alternatives, an event looking at the way forward to aid the victims in the campaign. This was followed by a seminar on the medical aid issues which are ongoing.

A press conference was held and organised by AmnestyIinternational chaired by their Secretary General and finally on the Sunday evening a candle light vigil was held by the second generation of victims impacted by this disaster. Their families will not forget and neither should we.

What happened in Bhopal?

On the night of December 2nd, 1984, a Union Carbide plant in Bhopal, India, began leaking 27 tons of the deadly gas methyl isocyanate. None of the six safety systems designed to contain such a leak were operational, allowing the gas to spread throughout the city of Bhopal. Half a million people were exposed to the gas and 25,000 have died to date as a result of their exposure. More than 120,000 people still suffer from ailments caused by the accident and the subsequent pollution at the plant site.

Sam and Scott are urging Scottish branches to undertake the following steps in order to help mark the anniversary, advance the campaign and keep the fight alive for decent health and safety here:

• Hold an event on 3rd December 2014 (or as close as possible) to mark the anniversary, try and get members and employers involved;
• Raise Bhopal at Health & Safety Committees;
• Consider making a donation to the Bhopal Medical Appeal;
• Invite Sam or Scott to speak at a Branch meeting following their trip;

Motion Text:
That the Parliament recognises that 3 December 2014 marks the 30th anniversary of the catastrophic poisonous gas leak from a pesticide factory in the city of Bhopal, which led to what is widely considered to be the world’s worst-ever industrial accident; pays tribute to the 25,000 people killed, their grieving families and the 120,000 survivors who have been made ill by the accident, most of whom are understood not to have access to adequate healthcare; believes that the company that was responsible for the incident, Union Carbide, which is now known as Dow Chemical, has not accepted responsibility; understands that, although the factory is closed, toxins continue to enter the only drinking water available to many Bhopalis and this has led to a second disaster in making people ill and in children being born dead or disabled; further understands that, since 1984, there has been steep growth in industries producing hazardous chemicals, both in India and throughout the world, which has led to consequent damage to workers’ health and safety, and notes that a Scottish delegation, with representatives from the unions, Community, CWU, UCU, NUJ, Unison and Unite, the Edinburgh TUC, the STUC, the Bhopal Medical Appeal,  European Work Hazards Network, Scottish Friends of Bhopal and the Scottish Hazards Campaign, is travelling to Bhopal to offer solidarity on the 30th anniversary and to learn from the commitment, strength and endurance of the Bhopali people in order to support Scotland’s own struggles for safer and cleaner workplaces and environments.