UNISON is once again proud to be supporting the inspiring Take One Action Film Festival. This is taking place in a hybrid edition in Edinburgh, Glasgow and online, from 22-26 September, followed by in-person festivals in Aberdeen and Inverness in October. See the trailer here. 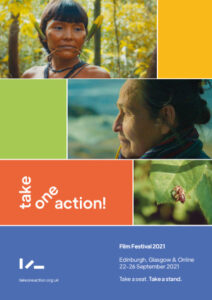 Then look at the programme of amazing films to see which you’d like to take a seat and take a stand for – taking a stand on a range of important social & environmental justice issues.

The full programme  is available here (and/or click on photo to left), with details of all screenings: Or check these links for online & each city…

We will have speakers at a small number of in person film screenings, including the opening film Living Proof. It has its world premiere in Edinburgh on 22 Sept and Glasgow on 23 Sept. UNISON Scotland Convener Lilian Macer will join a discussion after its screenings opening the festivals in Aberdeen, at Belmont Filmhouse, 8pm – 10.30pm on 22 October, and in Inverness at Eden Court Theatre & Cinema, 6.30pm – 9pm on 29 October. Details and book tickets here. Living Proof is described in the programme synopsis/’blurb’ as:

A stunning new archive documentary that looks for the roots of the climate crisis in Scotland’s post-war history: Was climate change inevitable? In the year that Scotland hosts COP26, curator Emily Munro searches for the roots of the climate crisis in our post-war history. 150 years of moving image heritage can only offer us a glimpse of human history, yet the proliferation of video today makes the moving image a crucial and contested site for documenting our impact on the planet. In this new feature-length documentary, archive footage from the National Library of Scotland portrays a country shaped by demands for energy and economic growth, while an eclectic soundtrack amplifies the voices of the past in powerful, and sometimes unsettling, ways. Are we heading into new territory, or are we caught in a cycle of familiar promises? Living Proof is a partnership project between the National Library of Scotland Moving Image Archive and Film Hub Scotland.

NB: TOA says: While the rest of our September festival line-up will be available online, Living Proof will be exclusively screened in venues – so make sure to grab your ticket.

Other films we are supporting include:

The closing film, The New Corporation: The Unfortunately Necessary Sequel, at Glasgow Film Theatre on Sunday 26 September, 4.30pm-7pm. Louise Giblin, International Officer with UNISON SEPA branch, and representing our International Committee, will be part of a discussion after the film, along with a speaker from Global Justice Now. Details and book tickets here.

The ‘blurb’ for the film says:

An urgent takedown of corporate greenwashing that pulls no punches: The filmmakers behind 2003’s global hit “The Corporation” return after almost 20 years with their “Unfortunately Necessary Sequel”, investigating how the corporate takeover of society is being justified by the sly rebranding of corporations as socially-conscious entities. From the climate crisis to racial injustice and surging inequality, The New Corporation lays bare the disturbing realities of companies’ desperation to achieve profit at any cost. Far from a sigh of despair, however, this punchy documentary celebrates the groundswell of movements taking to the streets in pursuit of justice and the planet’s future – providing a rallying cry for social justice, deeper democracy, and transformative solutions.

Of Land and Bread. ‘A raw account of life in occupied Palestine.’ Screening online only 22-26 September and on 31 October 2pm-4.30pm at the Eden Court Theatre and Cinema in Inverness. Kaila McCulloch, Co-Chair of UNISON Scotland’s International Committee, will take part in a post-film discussion there. Details and book tickets here. The ‘blurb’ says:

A raw account of life in occupied Palestine: In 2007, human rights organisation B’Tselem launched their Camera Project to enable volunteers in the West Bank to document their own lives under Israeli occupation. Of Land and Bread consists solely of raw footage recorded with these donated cameras, showing first-hand the lived experiences of Palestinians. Each vignette captures an incident – from petty humiliation to violent assault – casually perpetrated by a soldier, a policeman or a settler. Without any voiceover or mediation, this kaleidoscope of everyday injustice conveys the reality of institutionalised state terror and the impunity that emboldens its perpetrators. Palestinians lie on the receiving end of a project of dispossession of land, resources, and culture; Of Land and Bread stands as a bold act of defiance – and a strident call for solidarity. Content notes: Depictions of violent assault (against adults and children) as well as racism, verbal abuse and Islamophobia.

Tickets across all venues and online screenings are available on a sliding scale basis. Choose what to pay based on your personal circumstances, from £0-10. Details on the booking links/in the programme.

Trailers for each of the above films are available in the booking links.

Take One Action is also organising What the Cop! – “an exciting film initiative to help groups across Scotland explore climate issues in the lead-up to the UN Climate Conference being hosted in Glasgow in November.” Throughout September and October, TOA is supporting community groups of all shapes and sizes across Scotland to host screenings; explore key climate justice issues and find collective routes to action at COP26 in November – and beyond.