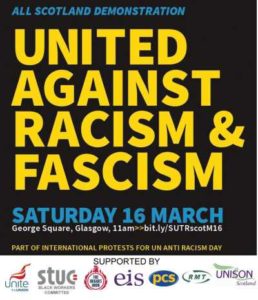 UNISON Scotland, the Scottish Trades Union Congress and many more are backing the Stand up to Racism UN Anti-racism demonstration in Glasgow’s George Square at 11am on 16 March.

16 March, UN Anti-Racism Day, is the day the world marches against racism and the rise of the far right. International coordination will see demonstrations alongside those in Britain taking place in: the US (New York & Washington DC); Brazil; Germany; Austria; Poland; Hungary; Greece; Catalonia & Spain; Denmark; Netherlands; Ireland; France; Turkey; Australia; Canada. We are agreed on the shared hashtag: #WorldAgainstRacism

Backing the demonstration, the STUC said: “There has been a sinister ‘normalisation’ of racism as a result of austerity, of cuts and scapegoating. We need to challenge this and celebrate our diversity.”

Stand Up to Racism said: “In Scotland over the past year we saw a shocking series of racist attacks in Edinburgh and disgusting threats to evict “failed” asylum seekers from their homes in Glasgow. With reports recently revealing that one of the biggest hotspots for far right activity in Britain is just over the border in the north east of England we recommit to counter the far right threat and offer our full solidarity to anti-racists across Britain doing the same.”