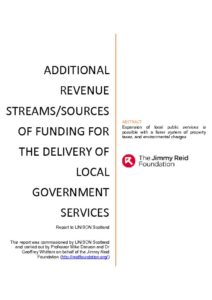 The report was carried out by Professor Mike Danson and Dr Geoffrey Whittam on behalf of UNISON Scotland and the Jimmy Reid Foundation.

We are calling for a fundamental review of funding local government.

The Report states that expansion of local public services is possible with a fairer system of property taxes, and environmental charges. Local government has borne the heaviest burden of austerity cuts to the Scottish Budget since the financial crash.

There simply isn’t enough money in the local government budget to meet the needs of our citizens. We need to examine new and alternative sources of revenue for local government.

Together with an overall reduction in funding, during a period of austerity, this has resulted, in severe financial pressures and impacted upon, the quality and delivery of vital public services. Politicians in all spheres must create the time and space for a fundamental review of funding local government. This report is a contribution, to that essential debate”

Professor Mike Danson, the lead author of the report said: “Within the constraints of the fiscal powers devolved under successive Scotland Acts, there are still some opportunities to generate greater funding for public services locally. Some changes will require time to explore, plan and introduce but it is economically efficient and effective to shift the tax burden onto property and land owners and away from Council Taxpayers, making the tax system more progressive and more based on ability to pay.”

i) Recruitment of additional council, government and agency staff to ensure that registration, regulation and collection of revenues is undertaken in order to identify where loopholes, avoidance and coverage has allowed some to escape making their fair contribution.

ii) Committees of the Scottish Parliament should examine whether the Small Business Bonus Scheme, and other reliefs from Non-Domestic Rates, are fit for purpose and determine what alternatives could support private and social enterprises and other bodies more effectively.

iii) Unions should remind the Government and Parliament of how the Fair Work Framework should underpin both these reviews and implementation of tax changes. Making reliefs and subsidies and tenders for public procurement dependent on good practices at the local level should raise revenues indirectly for Council budgets.

iv) Parliament, councils, unions and communities should explore how new taxes and levies can be introduced to support inclusive growth and the foundational economy. Attention should be paid to the opportunity for such initiatives to change behaviours and overcome negative externalities and market failures.

v) Unions should consider how municipalisation of buses, energy, and other public services could be appropriately pursued. This may require powers to be devolved from Westminster.

vi) Unions and others should also explore how local authority debts and PFI/PPP contracts can be taken over by the Treasury, saving local government many billions in interest charges each year and so releasing tax revenues for investment in local economies and communities.

vii) UNISON should consider establishing improved research and policy facilities through collaborations with academics and others in the STUC research network to assist in the above.

Some of the proposals that may follow from these recommendations would generate new income for local authorities while others may rebalance the burden of taxation onto the wealthy and higher income groups.

Some of the changes that may follow can be implemented immediately, some would require legislation by the Scottish Parliament, and others would require significant further devolution of fiscal and other powers from the Westminster Parliament.