UNISON has launched a campaign today (Monday) for local government workers who are delivering vital services during COVID-19 crisis. They are calling on Scottish Government and COSLA to recognise the financial and emotional toll on the workforce.

UNISON are also campaigning for sustained long term investment to protect jobs, deliver a reduction in wage inequalities and for local government workers to be engaged in shaping the lockdown legacy.

UNISON has written to the Scottish Cabinet Secretary for Finance, Kate Forbes MSP and COSLA Resources Spokesperson, Cllr Gail MacGregor, calling on them to reward local government workers who have been delivering vital services for the national effort to defeat COVID-19; to review all local government jobs which have changed as a result of COVID-19; and to consolidate the Scottish Living Wage to ensure all the workforce get a wage that can properly support their families.

UNISON are also lobbying the Scottish and UK Governments for assurance that they will secure the long term financial stability of local government services and protect the jobs of local government staff into the future. Local government has borne the brunt of austerity over the past 10 years and could ill-afford the impact of the COVID crisis.

Johanna Baxter, UNISON head of local government said: “We need to discuss pay and conditions but a one-off payment for a select few will not deliver for the many local government workers and the communities they serve.  Only sustained long term investment will protect jobs and deliver a lockdown legacy that reduces wage inequalities – that is what UNISON’s plan will deliver.”

Mark Ferguson, chair of UNISON’s local government committee said: “Local government workers have responded heroically to the challenges posed by the COVID-19 crisis – providing support to the most vulnerable members of our communities, looking after the children of key workers, collecting our refuse and manning temporary body storage facilities for the deceased (to name but a few examples).  Their extraordinary efforts and the critical value of the roles they perform deserve to be rewarded and they need to be part of shaping the future of local services.”

UNISON have written to the Cabinet Secretary for Finance, Kate Forbes MSP, and the COSLA Resources Spokesperson, Cllr Gail MacGregor, on 9th May – copies of correspondence (see below)

The four strands of UNISON’s ‘Fighting Together Today For A Better Future Tomorrow’ are:

1. Rewarding local government workers – Local Government workers have delivered against the odds during this crisis and we believe there should be a COVID-19 premium that recognises the vital service they provide to our communities.

3. Shaping local government for the future – UNISON believe that some roles will have, and will continue to, change as a result of COVID-19. Where this is the case we believe the job evaluation of those roles should be reviewed. Additionally, we have already flagged to COSLA that care at home workers will have a SSSC qualification requirement from September this year which will require a re-evaluation of those roles. 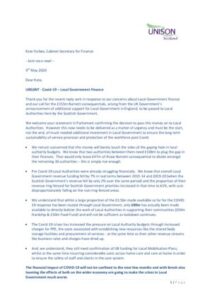 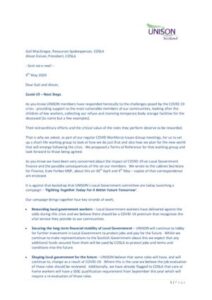