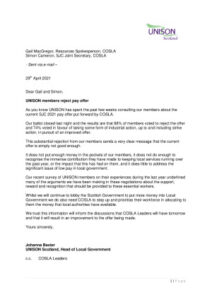 UNISON, the largest trade union in local government representing 80,000 local government workers across Scotland, has voted overwhelmingly to reject COSLA’s current pay offer and in favour of taking industrial action in pursuit of an improved offer.

In a letter to the employer announcing the result (attached), UNISON state that whilst they will continue to lobby the Scottish government for additional funds for local authorities the employers need to prioritise their workforce when deciding how to spend the money they do have.

UNISON state that local government workers have gone above and beyond in their response to the Covid pandemic – a fact which was been underlined in the findings of their recent survey of members experiences over the past year.

Johanna Baxter, UNISON Scotland head of local government, said: “This is a massive rejection of an inadequate pay offer from COSLA. Whilst the Scottish government and COSLA have been quick to praise these workers for their efforts during the pandemic neither seem willing to take any action at all to recognise and reward them. It is about time they did and our members are clear that if an improved offer is not forthcoming they are prepared to take industrial action in order to achieve one.

In a country where a quarter of children are living in poverty it should concern everyone that 55% of the Scottish local government workforce earns less than £25k per annum – that’s over 100,000 workers earning significantly below the average wage of £32,000 per annum. The best way to lift people out of poverty and regenerate our economy would be to put money into the pockets of the lowest paid.”

Mark Ferguson, UNISON Scotland Chair of Local Government Committee, said: “It is unacceptable for our members to be used as a political football which is kicked between the Scottish government and COSLA. Our members have kept local services running over the past year and the fact they have yet to receive any reward or recognition of their efforts is simply not good enough.”