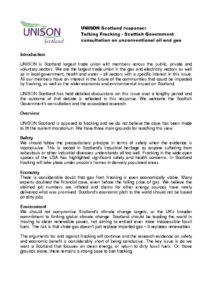 UNISON Scotland is opposed to fracking and we do not believe the case has been made to lift the current moratorium. We have three main grounds for reaching this view.

We should follow the precautionary principle in terms of safety when the evidence is inconclusive. This is rooted in Scotland’s industrial heritage as anyone suffering from asbestosis or other industrial diseases understands all too well. Fracking in the wide open spaces of the USA has highlighted significant safety and health concerns. In Scotland fracking will take place under people’s homes in densely populated areas.

There is considerable doubt that gas from fracking is even economically viable. Many experts doubted the financial case, even before the falling price of gas. We believe the claimed job numbers are inflated and claims for other energy sources have rarely delivered what was promised. Scotland’s economic pitch to the world should not be based on dirty jobs.

We should not compromise Scotland’s climate change targets, or the UK’s broader commitment to limiting global climate change. Scotland should be leading the world in moving to clean renewable power, not aiming to extract ever more inaccessible fossil fuels. The risk is that shale gas doesn’t just replace imported gas – it replaces renewables.

The arguments for and against fracking will continue and the research evidence on safety and economic benefit is considerably short of being conclusive. The key issue is do we want a Scotland that focuses on clean energy, or return to dirty fossil fuels. On those grounds alone, there remains a strong case to ban fracking.