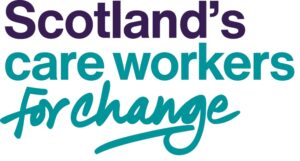 One consequence of Covid will be a reform of social care. UNISON is the union for care staff, so we have no intention of merely being spectators of these reforms. UNISON will be part of the process – making the arguments for the changes that will deliver for staff and care users wherever plans are being proposed or decisions made.

The starting point for any reforms will be the report of the Independent Review of Adult Social Care ( ‘the Feeley Review’.). This made a series of 53 recommendations. To begin taking these forward the Scottish Government will begin a consultation on the setting up of a National Care Service (NCS) in the next three months, legislation within a year and a National Care Service operational before the end of the Parliament.  Ahead of this the Scottish Government and CoSLA have issued a joint statement of intent declaring that they will work together to implement the core principles of the review.  One part of this joint action is to ensure that adult social care workers in Scotland will be paid at least the Real Living Wage of £9.50 per hour. Work will begin to implement this commitment from May and will be backdated to April 2021.

As well as this the Scottish Govt and Cosla will continue to work with the Fair Work in Social Care group to development of a minimum standards framework for terms and conditions. This will lead to the establishment of core requirements for ethical commissioning, ensuring that going fair work requirements and principles are met and delivered consistently.

These will all be welcomed and encouraged as improvements – but there other aspects of proposed changes that UNISON will need to consider. What should our focus be amongst the 53 recommendations that Feeley makes? The prospect of change raises issues about how we as a union recruit and organise in the sector.

This process has already begun. The Scottish Committee will coordinate our response. In March they Scottish Committee noted the publication of the Feeley review. Following that comments were received from the health and local government service groups and from social care representatives. Concern was expressed about the future role for local government and around IJBs as identified by the Feeley Report. Social Care focus is on enhancing terms and conditions and sectoral bargaining. The internal UNISON issue of representing the sector was also noted.

Given the broad nature of the issues that need to be considered it was agreed to set up a round table discussion. This will take place on July 7th  it will consist of  the health and local government service groups and involve social care workforce representatives. The results of the round table will be considered by the Scottish Committee who will frame our ongoing response.