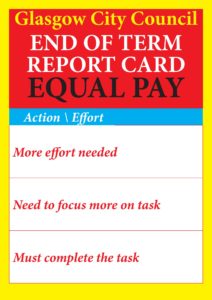 “Many of our members with Equal Pay claims work in education and those members will be demonstrating with UNISON today.  Its been six months since the decision was taken not to appeal the court’s decision on Equal Pay. Glasgow City Council could and should do better.

“Our members in education do an incredible job, supporting the education of Glasgow’s children and young people in the classroom, dealing with admin and enquiries,  feeding children, cleaning schools, keeping school buildings safe and secure.  It’s time school staff and others at Glasgow City Council were shown the dignity and respect that pay equality represents. That’s a valuable lesson to share with the young people of our city, that equality and respect extends to paying employees equally, whatever job they work in.”

UNISON Glasgow city branch welcomes the City Administration Committee proposal to scrap the current pay and grading system which lies at the heart of our members equal pay claims, this is known as the Working Pay and Benefits Review (WPBR).  However we also seek an urgent settlement of outstanding Equal Pay claims against Glasgow City Council, many of which stretch back to 2007 onwards.

Following the recent consultative ballot where UNISON members voted overwhelmingly for industrial action our members will be paying close attention to the settlement talks, reporting back regularly to ensure there is no delay in delivering on the promises made.

The Court of Session ruled last year on Glasgow City Council’s unequal pay system and inadequate current job evaluation scheme. Scotland’s top judges could not have been clearer – the council do not have a valid pay system.  Many workers in the council and its arm’s length external organisations (ALEOs) have been discriminated against since 2006 when the Workforce Pay and Benefits Review (WPBR) was implemented. Most of these workers are women, many low paid.

The Equal Pay demonstration will take place outside the City Chambers on Thursday the 28th of June at 12.30 pm.