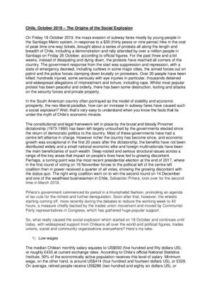 UNISON Scotland will be sending a message of solidarity (UPDATE: Now sent. Text here) to Chilean trade unions following a report  to our International Committee on the massive protests against the neoliberal Pinera government and demanding a new constitution.

We are very grateful to Oscar Mendoza for the comprehensive report, to the left, and for his excellent video update, below, prepared for our joint regional international seminar in Newcastle.

These are recommended if you would like to catch up with the background and context to the ongoing protests and strikes and the government’s response of suppression and  repression, with widespread allegations of human rights abuses by the police.

Oscar is a survivor of torture under the Pinochet regime, who has been living in Scotland since and was heavily involved in the late 80s and 90s in Chile solidarity campaigns.

His contribution to the meeting of UNISON Scotland and UNISON’s North West, Northern and Northern Ireland regions was very warmly received and we will be sending a solidarity message to the Chilean trade union confederation CUT-Chile

Thanks very much to @NorthernUNISON for looking after everyone so well at the joint seminar in Newcastle this weekend, where we met together also with North West & Northern Ireland regions.The packed agenda had important sessions, including on Zimbabwe, Palestine, Colombia (a hip hop exchange initiative with South Africa), Venezuela and Nicaragua.We were pleased to share information on our two new letter writing campaigns: Louise Giblin, Co-Chair of SEPA UNISON, spoke about the rural 2 de janeiro community in São Paulo in Brazil that we have been working with and major difficulties they are having due to changes to land reform policies by the far right Bolsonaro government. We will be writing letters seeking political support to help them progress their food project. Depute Convener Stephen Smellie described Turkey's appalling treatment of trade unionists and urged people to write to TU colleagues who have been jailed. More information, with copies of the letters, will be posted on our website next week. Convener Lilian Macer spoke about the UNISON delegation to Cuba late last year and how inspired she was by the achievements of the health system there. And International Committee Co-Chair Sam Macartney gave an update on BDS (Boycott, Divestment & Sanctions) campaigning in Scotland.We are very grateful to Oscar Mendoza, survivor of torture under the Pinochet regime, who has been living in Scotland since and was heavily involved in the late 80s and 90s in Chile solidarity campaigns.Oscar provided us with a written report on the background to the current massive protests against the neoliberal Pinera government and for a new constitution. You can read this here https://unison-scotland.org/wp-content/uploads/Chile-October-2019_The-Origins-of-the-Social-Explosion_Final.pdf Oscar also updated this report with some video comments, which you can watch below.His contribution was very warmly received and we will be sending a solidarity message to the Chilean trade union confederation.

Events linked to the UN climate talks in Madrid:

Members may also be interested in a number of events in Scotland in solidarity with Chile around the United Nations Climate Talks COP25, moved to Madrid from Chile after the government said it could no longer host the event.

Putting people & planet first, from Chile to Glasgow is a day of activities organised by Friends of the Earth Scotland, the Chilean Community in Glasgow, with the STUC. Sunday, 1 December 2019 from 2-9pm at the STUC, Woodlands Road, Glasgow. Includes screening of Nae Pasaran – 7-9pm. Details and poster below.  Facebook event here

This year’s UN global climate talks, COP25, were due to be held in Chile in December, but the Chilean government cancelled in the midst of mass street protests against the disastrous neoliberal economic and social policies, and deepening inequalities and injustices.

The climate talks have now been moved to Madrid but the people and the movements of Chile won’t be silenced. With Glasgow set to host COP26 next year it’s vital we show solidarity with the people of Chile and support their demands for social, environmental, and economic justice.

Join Chilean and climate activists for a day of activities to understand the Chilean situation, showing solidarity, organising for climate justice and understanding the common causes of these interlinked crises. 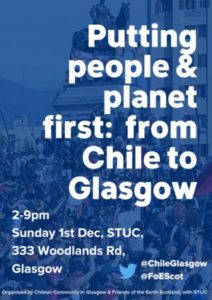