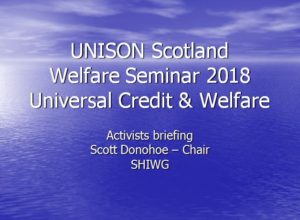 Scott was happy for us to share his excellent presentation, with the proviso that it was accurate when compiled, but obviously there could be changes announced at any time that may impact on some of the information/figures provided here.

Immense anger was expressed at the seminar about the ways in which Universal Credit is cutting the incomes of too many people, including some of the most vulnerable, adding to already outrageous inequalities and to in-work poverty. The rich are getting richer while benefits are slashed yet again – a deliberate and cruel UK Government policy, as Scott highlighted in describing examples of the hardship and misery caused, including increased levels of suicide among those making claims.