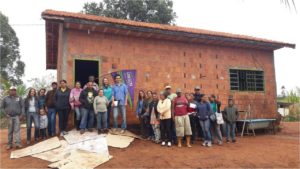 UNISON Scotland’s International Committee thanks all branches and members who contributed generously to our Sao Paulo Appeal 2018.

You raised £2,600, which the local women organising in Descalvado are now using for construction materials and equipment to help build an industrial community kitchen which will allow the ‘2 de janeiro settlement’ members to work together and add value to their food production.

The Appeal for this UNISON solidarity fund arose from joint work with the FERAESP union (Federation of Rural Workers of the State of Sao Paulo) members and community in Descalvado, in Brazil, and Strathclyde University’s Department of Work, Employment & Organisation.

FERAESP represents and organises agricultural labourers and supports workers and their families to occupy unutilised land in Sao Paulo. Some of the difficulties faced by the communities there include the impact of Brazilian agriculture shifting from food production to bio fuel production, agrochemicals polluting the land, automation, precarious work etc., as well as hostility to trade union members.

While we had originally hoped to raise double this total, for building a trade union resource centre for the agrarian settlement, the community kitchen there will help with the work of supporting women’s self-organisation in FERAESP.

Many thanks to Strathclyde University Research Associate Francis Virginio, for this excellent PowerPoint presentation on the project, which he spoke to at last month’s joint international seminar in Belfast, organised by UNISON Northern, North West, and Northern Ireland, and UNISON Scotland.

Francis recently visited Descalvado to discuss use of the funds and ongoing links between UNISON, the University and the community and FERAESP. These links, our solidarity fund, and continuing support for the trade union work there are particularly important due to the political situation in Brazil.

The presentation refers briefly to the recent (forthcoming at that stage) elections in early October and on Sunday 28 October) and the fear of the impact of the rise of the extreme right, with a polarised country, violence and hate crimes, the expansion of inequalities and increased exploitation of workers. International solidarity is critical at this time.

Background information about the project is here. And here is the blog by International Committee members Louise Giblin and Kaila McCulloch, written during their visit to the community in 2017.

Interested members are invited to a meeting at 12 noon for a prompt 12.15pm start on Friday 23 November  in UNISON Scotland’s office, 14 West Campbell Street, Glasgow G2 6RX. (NB: start time earlier than previously intimated.) We will have the latest updates, including post election information, from Zaqueu Ribeiro de Aguiar, a community member who is visiting Scotland from Descalvado, and from Brian Garvey, Lecturer & Researcher at Strathclyde University’s Department of Work, Employment & Organisation, as well as from his colleague Francis Virginio.

Please email Fiona Montgomery, if you will be attending, to help us have an indication of numbers. f.montgomery@unison.co.uk