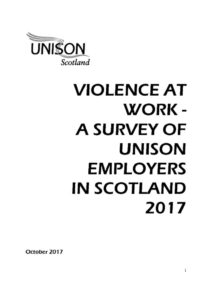 UNISON Scotland has carried out an annual survey of assaults to public sector workers based on Freedom of Information (FoI) requests to employers of UNISON members in the public sector since 2006. We ask employers to tell us the total number of assaults which have been reported in the latest year for which they have information.

Our first survey of public sector employers in 2006 reported just over 20,000 violent incidents in the NHS and local government – so the total had already more than doubled in the decade to last year – and it continues to increase.

UNISON has been in the forefront of the campaign, along with other unions, to have the issue of violence at work recognised, and we believe there is some evidence in the current survey to suggest that the increases we are reporting will have at least been partly due to improved awareness and reporting amongst workers and employers.

However, there are still public sector employers for which low figures and poor information on the issue suggests we still face a good deal of under-reporting. Whether reported or not, every assault on a worker serving the public is an assault too many. But if we do not have accurate and reliable systems for reporting all violence against public sector workers, truly effective measures to overcome and eliminate the problem will be impossible to achieve.

Workers in the community and voluntary sector are employed by organisations which are largely funded by the public purse and which work with government, councils and the health service.  In recent years we have been campaigning in the community and voluntary sector for better terms and conditions for workers who provide essential services – especially in social care.

In the last report we included some findings from research amongst UNISON members in this sector which indicated that they often face violence at work.

We have recently published an action toolkit called ‘Not Part of the Job’ to help in the campaign and have begun to expand this annual survey to include some community and voluntary employers which not currently covered by Freedom of Information legislation.

The massive scale of the problem of violence against public sector workers – including those in the community and voluntary sector – has slowly begun to emerge over the last decade. It is now time for action by employers and stronger legislation, regulation and oversight by government to end the epidemic.