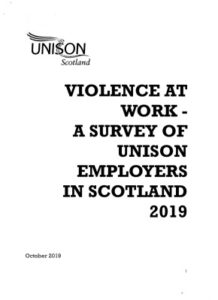 Violent incidents are still a problem for staff across public services. That’s the unavoidable conclusion of UNISON Scotland annual survey.

The results of this year’s survey were that a total of 37,662 assaults had been reported in the most last year.
Assaults on local government workers account for 55% of this total – an aggregate of 20,867.

Health Boards reported a total of 14714 assaults on NHS workers in their latest annual returns. At face value this marks decrease on last year of some 3,000 assaults.

This doesn’t necessarily mean that things are getting better. It may well just mean that incidents aren’t being reported.

The flip side of this is a rise in reported incidents can actually show success – as it can be a result of campaigning work to get staff to report incidents and employers to record them.

“We need to press more employers to sign up to UNISON’s Violence at Work Charter and continue to push the message that violence is not ‘part of the job’.

“We need more action from employers and strengthened legislation from the Scottish Government.”
UNISON Scotland’s Bargaining and Campaigns team have been carrying out this survey using Freedom of Information requests every year since 2006, when the total was around 20,000 – or nearly half of the current total.

The report can’t paint a full picture, but can give an idea of what’s going on and where more work might be necessary.

Take this year – the reported incidents in colleges and universities are down to zero in most places. It’s easier to believe that’s poor record keeping than that everyone has a perfect day every day.

What the report does show beyond is that this is a problem that isn’t going away.

See a PDF of the report here