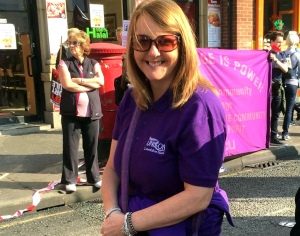 Welcome to all our delegates and visitors to Brighton for UNISON’s National Delegate Conference (NDC).

As we gather in Brighton to set UNISON policy I would like to take some time to reflect on the past year, both the challenges we have faced and our achievements in Scotland.

As we continue to defend our public services we have witnessed a reduction in funding in all areas.

The impact of the Government’s social, economic and political policies of austerity continues with the most vulnerable in our society being disproportionately affected.

Our message continues to be that high quality public services are affordable and can be funded through fair taxation; this is the basis for decent services provided by properly rewarded staff and is the key to achieving our social objectives.

Over the past year we have focused on our members pay. Thanks to years of pay restraint and inflation, public sector workers’ pay is worth far less now than 10 years ago. Our members are angry with the effect of the Westminster and Scottish Governments’ austerity agenda on them and their families.

In December our Further Education members in Scotland won an improved pay rise after a sustained campaign including industrial action.

The strike was about equality of pay and terms and conditions and recognised that support staff are the backbone of Scotland’s colleges and don’t deserve to be treated as second-class citizens. Our members stood together and stood strong and delivered a significant victory.

Our local government workers’ ballot turnout was below the 50% threshold under current legislation imposed by the UK Government, so we are not able to take industrial action.

However this will not stop our campaign to break the government’s public sector pay policy.

Since we met last year for our conference we have seen a number of significant changes, not least the result of the EU Referendum and the triggering of Article 50 in March 2017. The UK decision to exit the EU will undoubtedly affect working people, their families and communities in Scotland.

The EU exit negotiations require that the government both seeks to leave the EU but also negotiates a new relationship and trade deal with the EU. This is an historic European negotiation that must answer both the challenges of today and tomorrow and fundamentally address devolved UK constitutional and legal issues that also arise.

There is also the calling of a snap General Election by Theresa May (the outcome of which is unknown at the time of writing). All the indications are for another Tory UK Government which will pose significant challenge and threats to working people and trade unions.

Our international campaigns continue to raise the human rights violations and both financial and social injustice experienced by our sisters and brothers. Since last year’s conference the situation for Palestinians has worsened. Israel’s military occupation of the West Bank and the siege of Gaza has continued unabated.

In Colombia it has been a dramatic year which saw the peace agreement rejected in a national referendum in October and then in December following further negotiations ratified by the Colombian Government.

The attempted coup in Turkey and then the brutal reaction of the state by sacking 100,000s of workers, imprisoning Kurdish and other political opponents and the closing down of much of the press and media leading up to the controversial referendum, illustrated again why we need to offer solidarity to people in this region.

We face difficult times in the trade union movement with an avowedly anti-union UK government which has shown its disdain for workers’ rights.

Our conference is the opportunity for us to set our union’s policies that will deliver for our members and the communities we serve.

I look forward to seeing you and listening to your contributions in the debates and focussed discussions over the week of NDC. Enjoy conference.