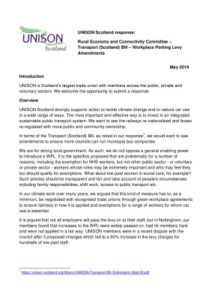 UNISON Scotland strongly supports action to tackle climate change and to reduce car use in a wide range of ways. The most important and effective way is to invest in an integrated sustainable public transport system. We want to see the railways re-nationalised and buses re-regulated with more public and community ownership.

In terms of the Transport (Scotland) Bill, as noted in our response[1], we would want to see amendments to ensure more councils can run municipal bus companies.

We are for strong local government. As such, we do not oppose a general enabling power to introduce a WPL. It is the specifics proposed that are problematic for a number of reasons, including the exemption for NHS workers, but not other public sector – or voluntary or private sector – workers whose roles may be extremely important and who may feel they too should qualify for exemptions. What about low paid women in social care, for example? Such policies should be transparent and fair and take account of people’s circumstances, including family responsibilities, shift work, access to public transport etc.

In our climate work over many years, we argued that this kind of measure has to, as a minimum, be negotiated with recognised trade unions through green workplace agreements to ensure fairness in how it is applied and exemptions for a range of workers for whom car use is essential.

It is argued that not all employers will pass the levy on to their staff, but in Nottingham, our members found that increases to the WPL were widely passed on, had hit members hard and were not applied in a fair way. UNISON members were in a recent dispute with the council after it proposed changes which led to a 60% increase in the levy charges for hundreds of low paid staff.

The way to get people out of their cars and into buses and trains and cycling and walking is by making public transport work for people instead of allowing the shockingly poor performance of ScotRail and the shockingly expensive pricing of the bus monopolies.

We need more funding for active travel and more municipal bus companies, like Lothian Buses. Not the current position of what are in effect local bus monopolies that fail to provide decent evening and weekend services or to cover outlying and rural areas.

Many of our members can’t afford cars and have to rely on those outrageously expensive buses or face the shocking overcrowding, cancellations and stop skipping that we have seen too much of on ScotRail trains.

We say nationalise the railways and re-regulate the buses. Support for public transport is a win, win, win on improving health, on cutting air pollution and on tackling climate change.