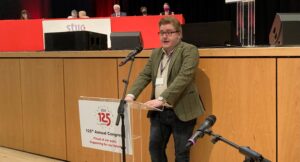 #STUC22 Congress recognised the key importance of bringing young people into our movement and addressing the apathy that many have towards politics.

It backed the STUC Youth Conference’s call for an education programme, co-produced with young people, to help young workers recognise the power they have as a collective to make changes.

Supporting, UNISON young member Fred Bayer spoke about his German background and his gran, who as a child growing up in Germany was indoctrinated into Nazism, later de-indoctrinated when the war ended.

Fred added that this has always given him a unique sense of perspective.

“My gran wasn’t some monster, she wasn’t innately evil, and yet, as a child, she was indoctrinated into supporting the greatest evil in human history.

“What this can teach us, comrades, is the importance of exposing youngsters to our struggle, to the ethical politics of the left. It’s the only way to defend them against the onslaught of right-wing rhetoric,” warned Fred.

Fred’s mum was a socialist and trade unionist and he joined a union as a matter of course. Why wouldn’t you, he asked.

“The unfortunate reality, though, is that that’s not the context most young people grow up in.

“Even if you’re lucky enough to have a parent that’s in a trade union, they might never speak about it, or your path in life might be so different to theirs that you don’t think it’s relevant.

“If your dad’s a train driver and you’re a pharmacist, you might not even realise that there’s a union you can (and should) join.”

He paid tribute to the Unions into Schools initiative but called for this to go further – for a programme that has its roots in the successes and values of our movement but that addresses politics more broadly. “A programme not just for school children, but for all young people.”

“Scotland’s young people are fertile ground for our movement, and for left-wing politics more generally. And yet, most of us don’t join a union, and most of us don’t even bother to vote in elections,” said Fred.

“We as a movement have a responsibility to tackle this political apathy head-on, and play our part in bringing young people back into unions, back into politics, back into the debate, because if young people don’t drive change, who will?”