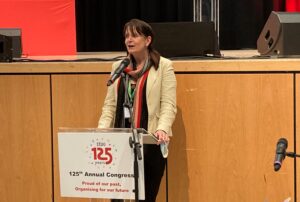 #STUC22 Congress heard that sexual harassment and abuse from men is a constant problem in the folk and traditional music sector. A motion from the Musicians’ Union called for action to ensure women musicians are treated with respect and dignity.

“We know the problem of sexual harassment is greatest in occupations and sectors which are male dominated. But it’s also too common in public services including the NHS, which are female dominated but hierarchical with large imbalances of power.”

Grace told Congress, “Last year the charity Plan International UK published research findings that 58% of girls aged 14 to 21 years old in the UK have been publicly sexually harassed in a learning setting – a setting that is of course a workplace for many UNISON and other trade union members. Two thirds of girls were harassed by someone from their school, college or university.”

“We need really strong workplace policies, backed with training for managers, and with the implementation reviewed jointly with the trade union, so that workers can have confidence in it.”