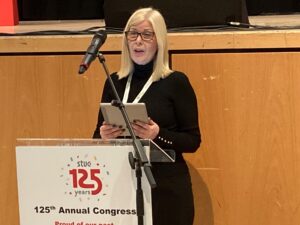 #STUC22 heard that despite years of campaigning by sexual violence survivors, prevention groups, trade unions and student unions that Gender Based Violence remains endemic in the UK.

A 2021 survey of university and college staff discovered that 12% of women and 5% of men had directly experienced sexual violence. It also reported that 70% of respondents experienced it as an ongoing pattern of behaviour rather than a one-off incident.

Congress backed a call from the UCU to press the Scottish Government and employers to take steps to end gender based violence.

UNISON’s June Maguire highlighted the work already carried out by the trade unions within the higher education sector in negotiating policies and developing guidance for dealing with Gender Based Violence.

Despite this work she noted that women are still left living is a state of fear as Gender Based Violence often goes unchallenged. June said that “Only a fraction of incidents are reported, and often when it is reported women’s experiences are minimised, and the impact is either wilfully or ignorantly misunderstood.”

“You can perhaps pass off the murderers themselves as untypical, but what of the men, the police officers who turned a blind eye to their colleague’s behaviour or were members of the WhatsApp group? The very people women are supposed to turn to for help if they become victims of sexual violence”

It is not good enough for men to stand by as silent observers as she said, “silence is compliance” instead she urged men to “to speak out loudly and strongly about the plight of women and girls facing sexual violence on a daily basis.”