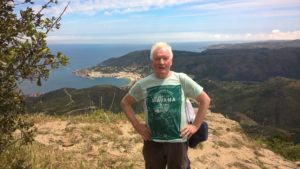 Andy Douglas of the Stirling Branch trained hard for his latest adventure in May – a 26 mile walk through the beautiful Pyrenees to raise money for a cause close to his heart, There for You, UNISON’s Welfare Fund.

He joined another 11 UNISON walkers (hailing from from Dundee to Devon via Northern Ireland) for the three days it took them to cover the distance, walking an average of over 30,000 steps a day. “And not on the flat,” Andy reminds us, “Up and down hill!”

The initial target was for each walker to raise £1600. Andy thinks he will have raised about £2,000 plus gift aid and that altogether, the intrepid trekkers will have raised around £20,000 for There for You. Andy was keen to thank all those who donated.

Branches and individuals can still contribute – See Andy Douglas (he’s the one that bears a striking resemblance to this picture) for a sponsorship form.

Asked about his best memories, Andy said, “Really it was the sense of achievement. I trained hard before I went, walking in the Ochils and the mountains around Pitlochry.

“We did 17 miles the first day and I can honestly say that I managed no bother. The training stood me in really good stead and I could have carried on.

“Also it was great camaraderie. Everyone got on really well and we were all in it for the same reason – to raise funds for There for You.

“The scenery was beautiful. One of the days we came over a hill and saw the village of Cadaques down below us, a cluster of white houses set round a bay. For culture buffs it’s where Salvador Dali used to visit and his painting was in the little white church.

“Overall it was a great experience for us all. We all wished it could have gone on longer and we’re all keen to do it again.”

Stirling Branch’s Andy Douglas will be heading to the Pyrenees as part of a group of 16 with three from Scotland to raise money for UNISON’s ‘There For You’ charity. They will be covering 40km in three days in May 2017. You can sponsor Andy on this form.

Andy reports: “The registration fee is £295 and we are expected to raise £1,600.00 through sponsorship. Last year the charity challenge raise over £23,000 and we would hope to equal that this year. The charity gives out around £500,000 per year in grants and assistance to our members and their dependants.

“This assistance can be for saving people losing their homes, getting members out of violent situations, illness, loss of earnings, school clothing grants, heating grants, recuperating from illness and many other ways of assisting vulnerable members and their families.

“This can only be done through donations, charity events and our own lottery, so you may appreciate the work involved in raising funds. Training going well and climbed Dumyat on Saturday as part of this, maybe Ben Nevis next!”