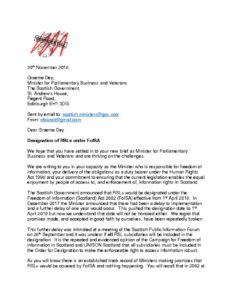 The Scottish Government announced that RSLs would be designated under the Freedom of Information (Scotland) Act 2002 (FoISA) effective from 1st April 2018. In December 2017 the Minister announced that there had been a delay to implementation and a further delay of one year would occur. This pushed the designation date to 1st April 2019 but now we understand that date will not be honored either. We regret that promises made, and accepted in good faith by ourselves, have been repeatedly broken.

Public money should come with FOI attached. Don’t want the scrutiny and accountability…don’t take the cash.  (See media coverage on The Ferret website)