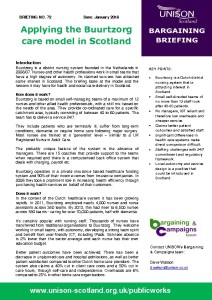 Introduction
Buurtzorg is a district nursing system founded in the Netherlands in 2006/07. Nurses and other health professions work in small teams that have a high degree of autonomy. Its claimed success has attracted some interest in Scotland. This briefing looks at the model and the lessons it may have for health and social care delivery in Scotland.

How does it work?
Buurtzorg is based on small self-managing teams of a maximum of 12 nurses and other allied health professionals, with a skill mix based on the needs of the area. They provide co-ordinated care for a specific catchment area, typically consisting of between 40 to 60 patients. The team has to deliver a service 24/7.

They include patients who are terminally ill, suffer from long-term conditions, dementia or require home care following major surgery. Most nurses are trained at a ‘generalist’ level – similar to a UK Registered Nurse in Adult Care.

The probably unique feature of the system is the absence of managers. There are 15 coaches that provide support to the teams when required and there is a computerised back office system that deals with charging, payroll etc.

Buurtzorg operates in a private insurance based healthcare funding system and 90% of their income comes from insurance companies. In 2006 they took a prominent role in increasing health efficiency through purchasing health services on behalf of their customers.

Does it work?
In the context of the Dutch healthcare system it has been growing rapidly. In 2011, Buurtzorg employed nearly 4,000 nurses and nurse assistants across 380 teams. By 2013, this had risen to 6,500 nurses across 580 teams – caring for over 70,000 patients, half with dementia.

It’s certainly popular with nursing staff. Thousands of nurses have transferred from traditional organisations to Buurtzorg. They welcome working in small teams, with autonomy, developing a strong team spirit and benefit from user-friendly ICT, including IPads. Sickness absence is 2% lower than the sector average and each nurse has their own education budget.

Better patient outcomes have been achieved. There has been a decrease in unplanned care and hospital admissions, as well as better patient satisfaction compared to other Dutch home care providers. The system also claims a 40% cut in client care costs and a 50% cut in care hours, through self-care and independence. Overheads are 6% compared to 25% in other home care organisations.

Applying the model in Scotland
As with any international model, however successful, applying it elsewhere has its challenges.

Guy’s and St Thomas’s NHS Trust in London are working with consultants to scope and design ‘test and learn’ exercises in its community nursing services.

Potential gains?
Many of the problems in the Netherlands that led to Buurtzorg exist in Scotland. Fragmentation of service delivery and providers, together with an over reliance on low paid, poorly trained staff in outsourced social care.

Designing services from the bottom up has been a long standing UNISON policy goal and was supported by the Christie Commission on the future delivery of public services in Scotland. That report also highlighted the benefits of system thinking approaches that have had similar positive outcomes to Buurtzorg. Christie also highlighted the benefits of joining up public services.

Adopting a more multi-disciplinary, public service version of Buurtzorg could be an opportunity to give staff greater autonomy, over smaller areas and integrate staff into single public service hubs, rather than the current fragmented system. A decent ICT system would be welcome based on recent UNISON surveys!

Conclusion
Lifting the Buurtzorg system into Scotland isn’t practical due to the significant differences that exist between the Netherlands and Scotland. However, there is much that can be learned from the model and it has some potential to be applied positively within a new public service delivery model.

Action for Branches
Please advise your RO and service group of any local initiatives to apply this model in Scotland.